The 1019 – Gene Regulation model was the final Lectron System ausbausystem and complete model released for purchase. Variations of this model (2017 and 2018) were available for sale starting in 2016.

This model brings to the pinnacle of the exploring of biological concepts with the Lectron System.  Previous models delving into this topic included the Kybernetik I, II, and III Models of the Braun era and LectronMW era (Edzard Timmer), the Funktionsmodelle model of the LectronMW era (Hartmut Birett), and the Neurophysiology (2016) models I and II of the LectronRWO era (a collaboration between Gerd Käuser and Gerd Kopperschmidt).

It shipped initially in the largest case Lectron-RWO had and cost about 1200 Euros in no small measure due to the 12 gene blocks (graphic on the left) that were included at a cost of 85 Euros a piece.  This was the single most expensive block to date as well due to the labor involved in assembling it. 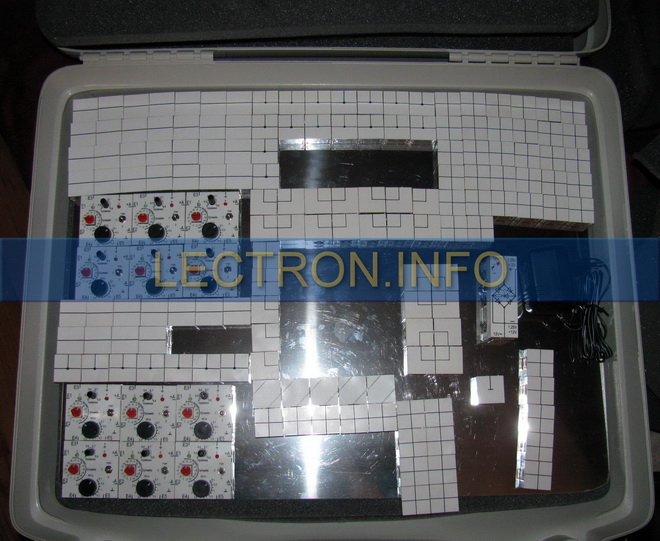 The layout was finalized in 2017 using the graphic below.

This model is the work and collaboration between Gerd Kopperschmidt and Professor Stefan Bornholdt (faculty member of the Institute for Theoretical Physics, University of Bremen, GERMANY). The remarkable gene block was designed by Mr. Kopperschmidt to electronically demonstrate biological gene regulation networks.

This is a professional, university level model which explores the dynamics of gene regulation networks. From the manual:
Predicting dynamics of genetic regulation and information processing of biochemical networks in living cells usually involves complex computer models and simulations. Opposite to using mathematics, a simple gedanken experiment may often be sufficient to predict basic dynamics of a circuit, e.g. as often exercised among colleagues when drawing biochemical pathways on the blackboard and discussing their potential dynamics.
The Lectron Network Simulation Lab closes the gap between these two approaches by a simple simulation hardware that allows exploration of dynamics of small regulatory circuits.

A more complete discussion of the subject can be seen by clicking on the following link:
Dynamics on and of Biological Networks: Case Studies on the Machinery of Life

The lecture is given by Professor Dr. Bornholdt.

The English manual was completed in 2017 but due to the passing of Mr. Wolfgang Schrank (Managing Director of Lectron, GmbH) and Mr. Norbert Cahn von Seelen (Lectron System product manager), this model has not been marketed leading to very few sales.

The English version of the manual may be downloaded/reviewed here.

The German version of the manual may be downloaded/reviewed here.